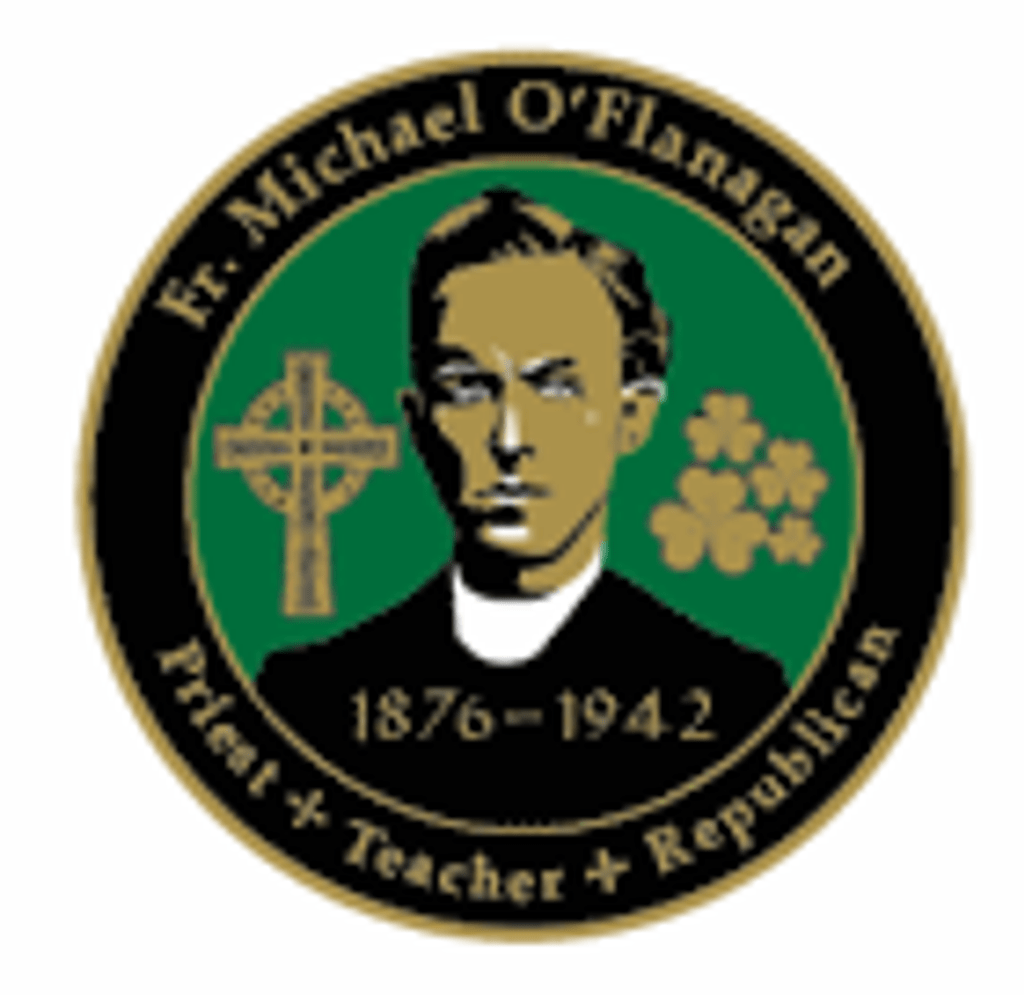 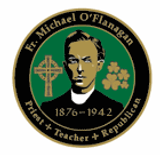 Fr. Michael O’Flanagan was born in 1876 near Castlerea, Co. Roscommon to parents who were native Irish speakers. Folowing a primary education at Cloonboniffe N.S., he had his first association with Sligo when he attended secondary school at Summerhill College . On graduating there in 1894, he entered St. Patrick’s College, Maynooth, where he was ordained for the Diocese of Elphin in 1900. Following his ordination he returned to Summerhill College and worked there as a teacher until 1904.

His clerical duties soon became interlaced with efforts to establish a viable basis for the movement towards Irish Independence. He firmly believed that the Irish language, rural industry and the local Church were vital elements in the achievement of this. His skills of oratory were matched by an originality and genius for fundraising. Prior to one of his trips, on behalf of Connradh na Gaeilge, to America, he cut a sod from each of the thirty two counties of Ireland ; bringing these with him, he invited Irish-Americans to walk on their native soil at a dollar a time.

Appointed to Cliffoney
After a term (1912-14) as Advent preacher at St. Sylvester in Rome, his involvement with the people of North Sligo began when he was appointed in 1914 as curate to the parish of Ahamlish, serving in Cliffoney village. Immediately on his arrival in North Sligo he encouraged the people there to organise in defence of their rights that were often impinged upon by oppressive bureaucracies, landlords and the R.I.C.

Shortly he became involved in a remarkable incident that came to be known as the ‘Cloonerco Bog Fight’. Taking on the establishment, against the wishes of Bishop Coyne, he agitated for turbary rights [right to cut turf] for the local people. This situation was brought about by the Congested District’s Board’s acquisition of the Hippsley and Sullivan estate and their consequent insistence on re-distributing turf cutting rights to families who had relatives in the British Army or R.I.C.

Fr. Michael defies Bishop Coyne
Despite intensive correspondence by Fr. O’Flanagan to have the people’s rights restored, the Congested Districts Board (C.D.B.), a Government body, were determined to reserve the bogs for people of their choice: families having members serving with the British army and so on. By late June local people were in a desperate position as no turf had been cut and they were facing the unthinkable prospect of a winter without fuel.

Ignoring a warning by Bishop Coyne not to get involved, Fr. O’Flanagan, addressing his congregation at Cliffoney Church on June 29th, 1915 , told them to wait outside for him after Mass. Here he instructed them to assemble the next morning with their turf cutting implements. He would lead them to the bogs where he himself would cut the first of the forbidden turf. This was done and the dauntless Fr. Michael led his flock to the Cloonerco bogs. A large body of R.I.C., under Sgt. Perry, (who was to die some years later in the Moneygold ambush) followed and ordered the crowd to stop.

"OUR OWN TURF FOR OUR OWN PEOPLE"
True to his word the dauntless priest stepped behind the spade and cut the first turf. It was a clever move as the RIC, fearing the vengeance of the people, would be very reluctant to arrest a priest. Some of those present were arrested and legal action taken but the turf were cut and saved and eventually brought down from the bogs where they were built in a large stack close to the R.I.C. barracks directly in front of what is now Cliffoney Parish Hall. A large sign was placed on the stack: “OUR OWN TURF FOR OUR OWN PEOPLE: FOREIGNERS HAVE NO RIGHTS HERE”.

O’Flanagan survived the actions brought against him by the authorities but Bishop Coyne, furious at this flouting of his authority, transferred him from Cliffoney to Crossna in Roscommon. The people were dismayed at the removal from their midst of a priest and leader they had come to love and respect. Walking and on horse and ass carts they made their way in procession to the Bishop’s palace in Sligo pleading with him that their priest be returned to them. When this was refused they barricaded Cliffoney Church, nailing the doors and windows shut, thus preventing Bishop Coyne from sending a replacement. They mounted a guard day and night to prevent any surprise move by the Bishop. Large crowds assembled on Sundays outside the Church to recite the Rosary.

The impasse lasted until Christmas 1915 when the Bishop agreed to provide a priest ‘who would be a good Irishman and a patriot’ to replace Fr. Michael O’Flanagan. Thus ended the remarkable saga of the ‘Cloonerco Bog Fight’.

Father Michael O’Flanagan played a prominent part in the War of Independence in the following years. The freedom of Sligo was conferred on him and an illuminated scroll presented by Sligo Corporation in June 1918 on behalf of a grateful people. Outside the Town Hall, according to reports in the Sligo Champion, enthusiastic crowds ‘cheered themselves hoarse’