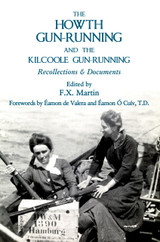 • An invaluable historical record of the first nationalist military operation in Ireland’s 20th Century independence struggle
• Written by the leaders of Irish nationalism - including Erskine Childers, Darrell Figgis, Pádraig Pearse, Bulmer Hobson, Arthur Griffith, Roger Casement, Seán MacDiarmada, Eoin MacNeill.
• A unique ‘running account’ of the planning, execution, and aftermath of the operation told by the men and women ‘on the ground’

This remarkable compendium of historical documents dating from 1914 and collected by
F.X. Martin in 1964, is a gripping historical record of the momentous events of July to August 1914, when 1,500 German rifles and thousands of rounds of ammunition were illegally landed in Ireland at Howth and Kilcoole. Among the dramatic and fascinating eye-witness accounts, diary-entries, letters, and telegrams is Mary Spring Rice’s famous Diary of life on board the Asgard during the voyage. This unique testimony - complemented by newspaper editorials and reports - from the leaders of Irish Nationalism including Erskine Childers, Darrell Figgis, Pádraig Pearse, Bulmer Hobson, Arthur Griffith, Roger Casement, Seán MacDiarmada and Eoin MacNeill provides an unrivalled and invaluable insight into Irish Nationalism’s first military operation of the twentieth century.
The success of the daring operation raised the stakes in the polarised political situation giving the Irish Volunteers a vital morale boost which ultimately exploded during Easter Week 1916. This collection is also notable for charting the early militant activism of Éamon de Valera and Liam Mellows and many others who left their mark on the evolution of modern Ireland.