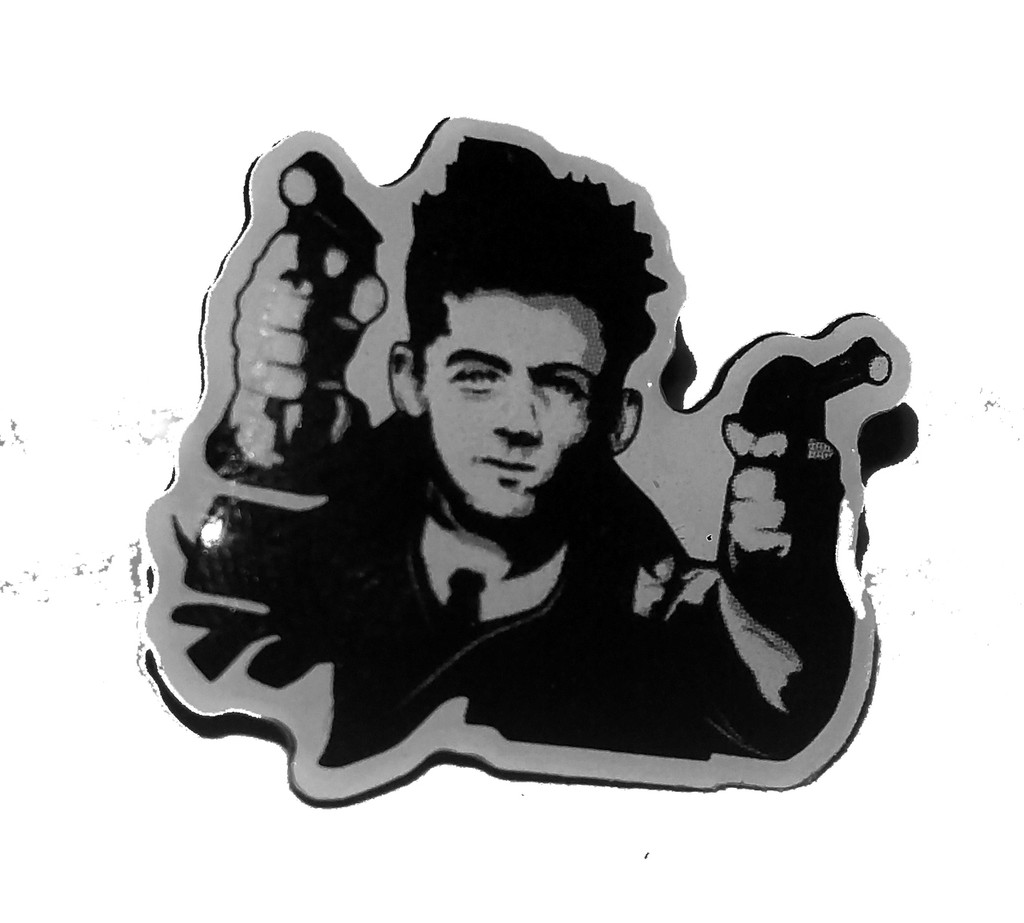 As Commander of the 3rd West Cork Flying Column Tom Barry was one of the great architects of modern guerrilla warfare in Ireland's fight for freedom. He has been controversial, not because he sought controversy, but mainly due to his decisiveness and his military acumen during the War of Independence.

The son of an RIC man, and second of fourteen children, Thomas Bernadine Barry was born on 1 July 1897 in Killorglin Co. Kerry. He spent his youth in Rosscarbery and Bandon. It was a sense of adventure that inspired him to join the British Army in 1915. Appointed bombardier on 1 March 1916, he reverted to the rank of gunner on 26 May 1916, at his own request. As part of the Mesopotamia Expeditionary force under General Townsend, Tom was among the 30,000 beleaguered troops who had withdrawn to Kut el Amara having failed to break the Turkish-German ring. On the communiqué board there, he read – REBELLION IN DUBLIN – the accounts of the 1916 Rising – the shelling, the arrests and executions. Away from home it was a rude awakening. Though wounded on the borders of Asiatic Russia, he recuperated and fought in Egypt, Jaffa and Jerusalem. He served in Italy and France; when the war ended he returned to Ireland in February 1919.

Through his association with the Hales' of Knocknacurra, founders of the Volunteers in West Cork, he got involved in the Volunteer movement. Abandoning his Business Studies, Tom served in Volunteer intelligence in mid-1919 when the enemy had become more ruthless. The capture and torture of Tom Hales, Brigade O/C and Pat Harte in July 1920, had a profound effect on Barry. His war experience and his demeanour found favour with the Brigade Officers; they expressed their belief that he would be a good choice as a training officer. Accordingly, his appointment as the Flying Column O/C 3rd West Cork brigade in October 1920 set him an unprecedented challenge. He had asked, and was given, absolute command. His decisions would be his and his alone without interference. He would take full responsibility, would be subject to no authority and would have to take the blame for any failure or disaster.

Though only just 23 years of age, Barry's warfare experience and innovative techniques helped him organise ambushes and raids with positive results. His ability to plan, and make split-second decisions whether in the height of battle or during a raid, allowed his men to trust him completely. The decision to stage an ambush at Kilmichael, confronting the dreaded C Company Auxiliaries in Macroom, was brave. As with all ambushes during the war, he applied a positive attitude and inspired his men likewise. When confronted with the enemy's false surrender, Barry was decisive.The false surrender controversy that has arisen in recent years, did not affect Tom Barry's reputation. I have shown in my biography of him that during the ambush on 28 November 1920, Barry and his men accepted a surrender call; then Auxiliaries resumed firing with their revolvers having thrown down their rifles. This action by the Auxiliaries, which was against all warfare rules, was known and accepted in the House of Commons, as well as locally and nationally at the time.

Kilmichael ambush was a turning point in the War of Independence. It boosted IRA morale; also it gained Barry greater respect as Commander. A member of the Flying Column, Jim Kearney said, 'Any man who would stand on the road before an on-coming enemy; men would die for him'.

The several ambushes that Barry organised were all unique. He never suggested 'a retreat' to his men. He fought to win. In open countryside like Kilmichael, or trapped at the water's edge in Burgatia, or fighting their way out of the Crossbarry encirclement, all required the mind of a military genius. As Dan Canty one of his Volunteers told me, 'He was a tradesman and soldering was his trade. He could take men and make soldiers of them.'

Because of his innovative military success, Michael Collins sought Barry's presence in Dublin in May 1921 and in London during the Treaty negotiations. Later, disagreeing with the Treaty terms, he became the first prisoner of the Civil War. Though outside the scope of this play, Barry was engaged in the 1923 cease-fire/dump arms deal; then in the 1930's he spent a term as IRA Chief-of-Staff; in 1949 he addressed huge crowds in New York, Chicago, Pittsburgh and Boston – his voice rang out, 'My one aim is to unite the Irish people – one race'. His lifelong wish was to end the partition of people on the one island.

Barry was a strict disciplinarian, ruthless when the need arose, as this play shows; but he was also kind – kind to the men who planned and fought with him, and kind also in later life to those in need.