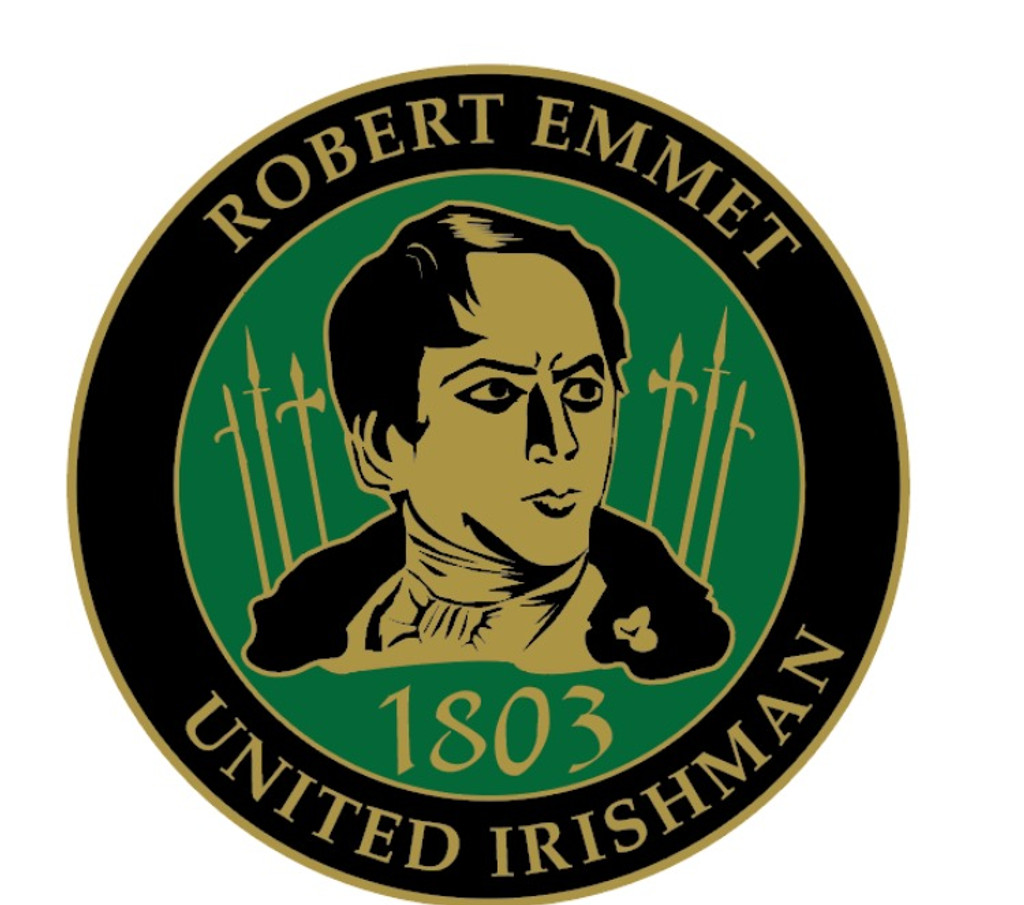 Robert Emmet's short, dramatic life came to a tragic end on September 20, 1803. However, although his life was short and his struggle in vain, his efforts, vision and idealism left a mythic mark on Irish and on the world history.

Born in Dublin in 1778 into a fairly-well-to-do Protestant family, Emmet was educated at Trinity College, Dublin. With high ideals of fraternity and equality, Robert, like his elder brother Thomas, became involved with the United Irishmen--an organization formed in 1791 by Wolfe Tone, James Tandy, and Thomas Russell to achieve Roman Catholic emancipation and, with Protestant cooperation, parliamentary reform.

From 1800 to 1802, Emmet resided on the continent with leaders of the United Irishmen who had been exiled from Ireland following the rebellion of 1798. On the continent, Emmet attempted to enlist French support for an insurrection against British rule. With the promise of French military aid secured, Emmet returned to Ireland in 1802 and began to organize and arm the country in preparation for the French landing. However, Emmet's hand was forced in July 1803 when an explosion at one of his arms depots compelled an early call for insurrection on July 23. His plan now awry, the ill-timed insurrection ended in confusion as various factions failed to receive or failed to heed the call to arms, and the promised French invasion failed to materialize.

Determined and undaunted Emmet--wearing a green and white uniform--marched a small band against Dublin Castle. On their way, the group happened upon Lord Kilwarden, the Lord Chief Justice and his nephew. Emmet's followers seized the Lord Chief Justice and his nephew from their coach, piked them to death and then began to riot in the streets. Disillusioned by his followers' behavior and realizing the cause was lost, Emmet escaped and hid in the Wicklow Mountains.

From the Wicklow Mountains, Emmet moved to Harold's Cross to be near Sarah Curran, his fiancée. [Thomas Moore's songs, "She is far from the land where her young hero sleeps" and "Oh breathe not the name" were inspired by Emmet's love for Sarah Curran.] Emmet had hoped to escape to America with Miss Curran. However, he was captured on August 25, 1803 and imprisoned at Kilmainham. He was tried for high treason in Green Street Courthouse where he was sentenced to be hanged, drawn and quartered.

When asked if he had any thing to say in response to this sentence, Emmet gave what is considered to be one of the most famous speeches of the period. Emmet's speech to the court [The Speech from the Dock] could be regarded as the last protest of the United Irishmen:

' I have but one request to ask at my departure from this world – it is the charity of its silence. Let no man write my epitaph. No man can write my epitaph, for as no man who knows my motives and character dares now to vindicate them, let not prejudice or ignorance asperse them. Let them rest in obscurity and peace until other times and other men can do justice to them. When my country takes her place among the nations of the earth, then shall my character be vindicated, then may my epitaph be written'.

Although he held out hope for a rescue, on September 20, 1803, he was executed. Out of deference to his aristocratic background, Emmet was hanged and beheaded but was not subsequently disemboweled - as such a sentence usually involved. His burial site remains a mystery to this date.

In 2003, Ireland and the world will remember the 200th anniversary of Robert Emmet's death and will commemorate a earlier period of Irish history in which Irish Protestants and Catholics were united under one banner. In remembering those times, we can hope, pray and work for a modern era of peace and equality in the land.

Ireland has taken 'her place among the nations of the world'. In preparation for the bicentennial of his death, information about Robert Emmet currently is being gathered on the internet at http://www.RobertEmmet.org.

Robert Emmet - An article provided by The Information about Ireland Site.