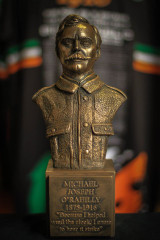 Friday April, 29 1916. The General Post Office in Dublin, occupied on the Monday as the headquarters of republican insurrection, was burning fiercely. The insurgents inside had decided they had to make their escape across Henry Street to the network of small houses and shops on Moore Street.

A small party of twenty armed men dashed across the open street to establish a toehold there and to clear out a British barricade. At their head was a distinguished looking gentleman in green uniform, complete with Victorian moustache and sword.

The charging party was hit by volleys of British bullets from the barricades on both sides. Four Volunteers were killed outright. Their leader, the moustached gentleman, fell wounded in the face. He managed to drag himself out of the line of fire to Sackville Lane, where he lay, bleeding, grievously injured. His name was Michael O’Rahilly, better known as ‘The O’Rahilly’.

It was not until after the insurgents, who had escaped from the GPO to Moore Street, surrendered, over 24 hours later, that O’Rahilly’s comrades, or any help, could reach him. According to Bulmer Hobson, an ambulance driver named Albert Mitchel was the first to come upon him. He had since died of blood loss. Mitchel took his personal belongings including his watch to his sister