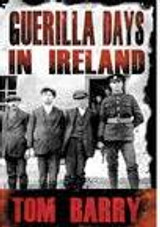 Admired by Che Guevara, feared by the British Army, loved by the people he led.

Tom Barry, legendary Commander of the  West Cork Flying Column survived the War of Independence to tell his incredible story.

Guerilla Days in Ireland is Barry's compelling first-hand account of the struggle for independence in County Cork, the Rebel County.

Barry led a volunteer army in a victorious hide-and-seek campaign of Guerilla warfare matching wits against an enemy of overwhelming strength and power.

"Seven weeks before the truce to the Anglo-Irish War of July, 1921, the British presence in County Cork consisted of 8,800 front line infantry troops, 1,150 Black & Tan soldiers, 540 Auxiliaries, 2,080 machine gun corps, artillery and other unites -- a total of over 12,500 men. Against these British forces stood the Irish Republican Army whose "Flying Columns" never exceeded 310 riflemen in the whole of County Cork. Men, moreover, with "no experience of war. . . untrained in the use of arms. . . with no tactical training. . . practically unarmed. . . ". These "flying columns" were small groups of dedicated volunteers, severely commanded and disciplined. Constantly on the move, their paramount objective was merely to exist; to strike when conditions were favorable, to avoid disaster at all costs. In Guerilla Days in Ireland: A Personal Account of the Anglo-Irish War, which has been one of the classics of the Anglo-Irish War since its first publication in 1949, Tom Barry describes the setting up of the West Cork Flying Column, its training, and its plan of campaign. Guerilla Days in Ireland is the extraordinary story of the fight between two unequal forces, which ended in the withdrawal of the British from twenty-six counties. In particular, it is the story of the West Cork Flying Column under Tom Barry, a commander of genius and a national hero."