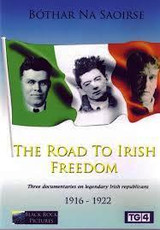 On another man's wound - Ernie O'Malley

-"Any man that comes into my house or my country to try to take it over by force, I'm going to kill him and i'm not one bit sorry for it"

He was Ireland’s most wanted man,  the IRA leader who helped start the Irish War of Independence. His best-selling book was the first inside story of the revolution.

"I had given allegiance to a certain ideal of freedom as personified by the irish republic. It had not been realised except in the mind"

The colourful life of Ernie O’Malley, man of action, traveller, author and intellectual, best remembered for the quality of his writing.

Doing My Bit For Ireland-Margaret Skinnider