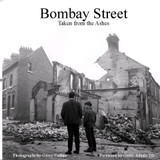 Fifty years ago the sectarian pogroms in August 1969 in Belfast triggered of the biggest forced mass movement of people since the 2nd World War.

Gerry Collins was witness to the immediate aftermath of these events. He was a founding member of the Christian Brothers Camera Club.

He went to Bombay Street where his aunt lived, the morning after it was burned out. Gerry grabbed his camera and three rolls of film. He took thirty photographs. Later that week he went into other areas in the Falls and took more snaps.

The photographs graphically capture the devastation and trauma of that hard time in our history.

For those who watched the news reports of the events fifty years ago as they unfolded on their television screens, or especially those who lived in the areas affected, these photos will spark very painful memories.

For those too young to remember, Gerry Collins’s pictures give a real sense of the chaos, confusion and shock that the community endured that terrible summer.

There is other television and photographic images of this defining period but Gerry Collins’ pictures reveal, in a very graphic way, the devastation of families who have lost their homes and whose few belongings litter the footpaths and roads in front of gutted houses.

The British soldiers on the streets, the barricades, ‘Free Belfast’, the burnt out mills which once dominated the Falls landscape, are all there in Gerry Collins stark black and white images.

Gerry Collins has done an enormous public service by taking the photographs and now allowing them to be seen. I commend him.

I also want to pay tribute to the men and women who rebuilt Bombay Street which was destroyed in the pogrom. It also arose out of the ashes, a very powerful symbol of the resilience and resourcefulness of a risen people.

Fifty years on we remain indebted to you all.

Bombay Street - Taken from the Ashes

Re-issue of catalogue from 2009 exhibition in Red Barn Gallery.